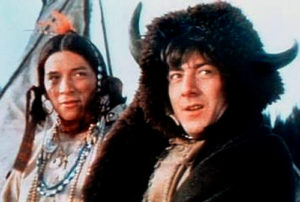 Arthur Penn’s rambling, whimsical approach to the Western, Little Big Man follows the long life of Dustin Hoffman’s Jack Crabb, a white man raised amongst the Cheyenne Indians, and observes the wave of Manifest Destiny rise, crest and recede in the American frontier! One of the early examples of the Revisionist Western, this film takes on the Native American genocide in America directly and yet still manages to be a sly, satirical comedy, while making its point crystal clear. We really liked this one, especially me, as I had never had the experience of seeing it before. A really smart, humanist adventure yarn, and of one the best discoveries I’ve had in the course of this podcast. Topics of conversation include Dustin Hoffman’s method acting proclivities, the popular cinematic portrayals of such larger than life characters as General Custer and Wild Bill Hickok, the gap between truth and story, White Privilege as employed by Jack Crabb, 70s melancholy and mythbusting, Superman’s nemesis Bizarro, and Arthur Penn’s emulation of the style of the picaresque novel in telling the story of the West. You get some impersonations of Hoffman’s old man voice, a few silly British characters, stuff like that. This movie’s great!

Other films (and TV) discussed are an old Western Dad caught on TV called The Streets of Laredo and The Great British Baking Show. You can reach us online at westernswithdad.com, where you can find older episode of the show that have dropped off iTunes, and you can email us at westernswithdad@gmail.com, where you can suggest episodes and ask any questions you might have! And please leave ratings and reviews on iTunes, as they increase the visibility of the show, and make us feel good!

1d ago1d ago
Subscribe
Unsubscribe
Hàng tuần+
Bald Move Pulp is where you can get your fix of robots, aliens, action space adventures, and everything in between; on television or on the big screen. Pulp was not made for serious drama, if that’s your thing, you might be looking for Bald Move Prestige.
G
Game of Thrones The Podcast

6d ago6d ago
Subscribe
Unsubscribe
Hàng tuần
Jim and A.Ron review each week's episode of HBO's Game of Thrones and your feedback.
B
Binge Mode: Marvel

1M ago6w ago
Subscribe
Unsubscribe
Hàng tháng
Join movie fans Michael DiGiovanni and Andrew Bloom as they set out to determine if all these so called classic films are indeed just that.
T
The Soundtrack Show