Westerns With Dad « »
BUTCH CASSIDY AND THE SUNDANCE KID! 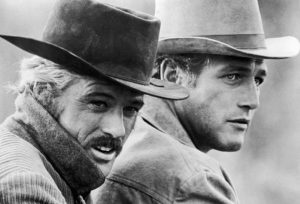 Finally, an episode we’ve been looking towards since the start, one of the most beloved American Westerns and a film listed on the AFI’s list of Hundred Best Films: 1969’s Butch Cassidy and the Sundance Kid, featuring the classic pairing of Paul Newman and Robert Redford in the titular roles. An affable, seriocomic romp through the end of the legendary Old West, the film features two of the greatest movie stars in history defining and perfecting their screen personas. The film, a loose ramble about the adventures of two infamous bank robbers, features countless iconic scenes, a delightful oscar-winning screenplay with hilarious dialogue written by William Goldman and a contentious 60s-influenced score by Burt Bacharach, which despite its Oscar wins and fame, kind of rubs Dad the wrong way! Topics of conversation include Dad’s Robert Redford story, the historic pairing of these two actors (as well as alternative Sundances originally approached for the role), whether or not the film is a deconstruction, Hugh Jackman’s high level of charm and low level of good movies, the role of destiny and fate in the story, and of course the famous ending, as well as the conspiracy theory regarding Butch’s ultimate fate (and whether it even matters anymore). Great film, you should watch.

We also talk a bit about Playoff Football and the Vince Vaughn film Brawl in Cell Block 99, written and directed by S Craig Zahler (of Bone Tomahawk fame). If you’d like to reach us online, please email us at westernswithdad@gmail.com, where you can ask questions or suggest episodes, and visit us at westernswithdad.com to download older episodes that have dropped off the iTunes feed. And speaking of iTunes, why not leave reviews or ratings of the show there, as it increases visibility! Alright!

1+ y ago1+ y ago
Subscribe
Unsubscribe
Hàng tháng
The Ringer’s Mallory Rubin and Jason Concepcion return to take their signature deep dives into the Marvel Cinematic Universe, covering all 23 films!
T
The Talking Dead - A podcast dedicated to the AMC TV series The Walking Dead

20d ago2w ago
Subscribe
Unsubscribe
Hàng tuần
The Talking Dead is a fan podcast dedicated to the AMC TV series The Walking Dead. Tune in for news, rumours, reviews, and more!
T
The Sci-Fi Christian

2d ago2d ago
Subscribe
Unsubscribe
Hàng tuần+
We see The Sci-Fi Christian, in all its iterations, as being about the collision between faith and nerdom. We believe that good genre fiction is about more than just entertainment. We seek to engage with the themes and philosophies behind our favorite stories, wrestling with the big ideas within speculative fiction. We’re unabashedly nerdy and unabashedly Christian. Even if your faith background differs from ours, we look forward to interacting with you at The Sci-Fi Christian!
T
The Twilight Zone Podcast

4d ago4d ago
Subscribe
Unsubscribe
Hàng tuần
In a unique weekly podcast, Edith Bowman sits down with a variety of film directors, actors, producers and composers to talk about the music that inspired them and how they use music in their films, from their current release to key moments in their career. The music chosen by our guests is woven into the interview and used alongside clips from their films. https://twitter.com/soundtrackinguk https://www.facebook.com/Soundtrackingwithedithbowman/ https://play.spotify.com/user/soundtrackingwi ...
B
Bald Move Pulp

7m ago7m ago
Subscribe
Unsubscribe
Hàng ngày
Bald Move Pulp is where you can get your fix of robots, aliens, action space adventures, and everything in between; on television or on the big screen. Pulp was not made for serious drama, if that’s your thing, you might be looking for Bald Move Prestige.
G
Game of Thrones The Podcast

1d ago1d ago
Subscribe
Unsubscribe
Hàng tuần
Become a Paid Subscriber and get bonus podcasts: https://anchor.fm/nowplayingpodcast/subscribe Three playful movie reviewers break down a variety of film franchises by dedicating a podcast to every single sequel, reboot, and spin-off in a series. In-depth conversations cover production history, literary sources, gossip, merchandising, and personal opinion with humor and critical insight. No cinematic universe is too obscure or sacred! Over 1,200 reviews at http://nowplayingpodcast.com
Nghe hơn 500 chủ đề