Curious Juneau « »
Long ago, Patsy Ann left her mark on historic Juneau, but where?

Brooks Pinney, 7, and his 4-year-old brother Bridger love learning about the bull terrier Patsy Ann. They love listening to their mom, Amy Pinney, read them the children’s book “Patsy Ann of Alaska: the true story of a dog” by Tricia Brown.

“The kids got super into it. They read it over and over and over, and we took a pedi cab around downtown this summer and learned a little bit more about the sculpture and then it just made it even more fascinating,” Pinney said.

On one page the book reads:

“She walked the aisles of the theater while string musicians played Beethoven. She warmed herself by the hotel’s wood stove as gold miners swapped tall tales. She pressed her paw prints in the fresh cement of a new sidewalk.”

Where are those paw prints? Pinney and her kids wanted to know.

Curious Juneau stars you and your questions. Every episode we help you find an answer. Catch up on past episodes, or ask your own question on the Curious Juneau page.

Born in 1929 in Portland, Oregon, Patsy Ann moved to Juneau with her owners as a puppy.

Several authors have written that she hated staying indoors, and often wandered around downtown. She would wait on the docks for the ships to come in.

Despite being deaf, she became famous for knowing exactly when the ships would arrive. By 1934, the mayor named her the “Official Greeter of Juneau.”

So those paw prints would’ve been set about 80 years ago.

That seemed like a good place to start. So I called up Tricia Brown, author of “Patsy Ann of Alaska.”

“What I remember is when I read about it, I wish I knew when it was because it didn’t say and that was, you know, it sparked my interest as well, so I’m not surprised it’s also inviting somebody else’s curiosity. I just didn’t, I don’t know,” Brown said.

Brown thought she read about the paw prints in a short book by Carl Burrows published in 1939.

I found it in the Alaska State Library’s historical collections. Burrows’ book is actually a red, 8-page booklet. A sketch of Patsy Ann is on the cover, but there wasn’t a word about paw prints in cement.

But Historical Collection library assistant Jacki Swearingen had a lead.

“It’s the Kinky Bayers collection, and he wrote down a lot of newspaper articles,” she said. “I’m going to look and see if maybe he has specific references to Patsy Ann.”

Swearingen came back with list of dates and brief descriptions of newspaper articles.

At the bottom of the page one description began, “Patsy Ann leaves her footprints for posterity …”

“I think this probably says ‘July 20, 1939’ and maybe that, the seven might mean seventh page of the newspaper,” Swearingen added.

Soon I was scrolling through copies of old Daily Alaska Empires on microfilm. 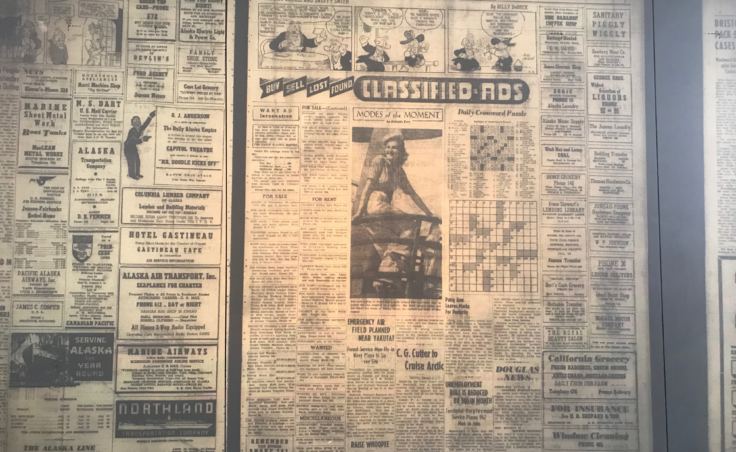 July 20, 1939: Below a crossword puzzle and comic strips, I spotted the article: “Patsy Ann Leaves Marks For Posterity.”

“Patsy Ann, Juneau’s canine boat greeter, many years a ‘landmark’ on the waterfront, left her footprints for posterity today.

“Workmen had just completed paving the South Seward Street sidewalk and it lay smooth and clean in the light of high noon — until Patsy Ann came along.

“Without concert, Patsy Ann trotted down the middle of the new cement. Workmen chased her and she increased her speed, but she kept to the middle of the fresh sidewalk and assured coming generations to some memory of Patsy Ann, the dog that all Juneau knows.”

So that’s that. Patsy Ann left her paw prints on a South Seward Street sidewalk.

Someone from City and Borough of Juneau Public Works told me that the sidewalk had probably been through two to four iterations since then.

I met with Amy Pinney and her kids on a snowy, windy day on South Seward, to share with them what I had found.

But seven-year-old Brooks still had a question.

“Why did they have to rip apart Patsy Ann’s track?” he asked.

His mom chimed in.

“I guess back then when they tore up the first sidewalk they wouldn’t have known what kind of a mascot she would have been for the town,” Pinney said. “But it should have been known since the mayor named her ’official ship greeter’ … and it just seems so romantic. If we get a dog we’ll have to get one just like Patsy Ann.”

Patsy Ann passed away in 1942, but you can still see her statue on the downtown Juneau waterfront. Even though her paw prints are gone, her story is still capturing Juneau kids’ imaginations.

19m ago19m ago
Subscribe
Unsubscribe
Hàng ngày
The latest in-depth coverage covering the intersection of technology and culture. WIRED’s award-winning journalism will help you make sense of a world in constant transformation. Join us as we explore the ways technology is changing our lives.
D
Diane Rehm: On My Mind

13h ago13h ago
Subscribe
Unsubscribe
Hàng tuần
Diane Rehm’s weekly podcast features newsmakers, writers, artists and thinkers on the issues she cares about most: what’s going on in Washington, ideas that inform, and the latest on living well as we live longer.
W
World Story of the Day : NPR

12h ago12h ago
Subscribe
Unsubscribe
Hàng tuần
Our CBS News team in Washington wraps up the news of the week and goes deep into the major stories with CBS News correspondents. It's the end-of-week news magazine show you can take with you wherever you go. (046510)
F
Farm To Table Talk

38m ago38m ago
Subscribe
Unsubscribe
Hàng tuần
Is it best that our food is Local and Organic or Big and Conventional? Our view is “Both, and..” We don’t come to the table with a bias, except that good farming like good food comes in all shapes and sizes. Farm to Table Talk explores issues and the growing interest in the story of how and where the food on our tables is produced, processed and marketed. The host, Rodger Wasson is a food and agriculture veteran. Although he was the first of his family to leave the grain and livestock farm a ...
W
WIRED Science: Space, Health, Biotech, and More

17m ago17m ago
Subscribe
Unsubscribe
Hàng ngày
Narrators read our favorite written stories. You can listen to them anywhere, including on your smart speaker. Play for audio versions of WIRED's latest Science stories on genetic engineering, robotics, space, climate change, and more.
T
The Big Fight

6d ago6d ago
Subscribe
Unsubscribe
Hàng tuần
Tempers fly as the newsmakers of the week face-off in this award-winning show. Anchored by Sanket Upadhyay, this weekly program has politicians battlling wits with a live audience.
T
To the Point

6d ago6d ago
Subscribe
Unsubscribe
Hàng tháng
A monthly reality-check on the issues Americans care about most. Host Warren Olney draws on his decades of experience to explore the people and issues shaping – and disrupting - our world. How did everything change so fast? Where are we headed? The conversations are informal, edgy and always informative. If Warren's asking, you want to know the answer.
O
OPB Politics Now