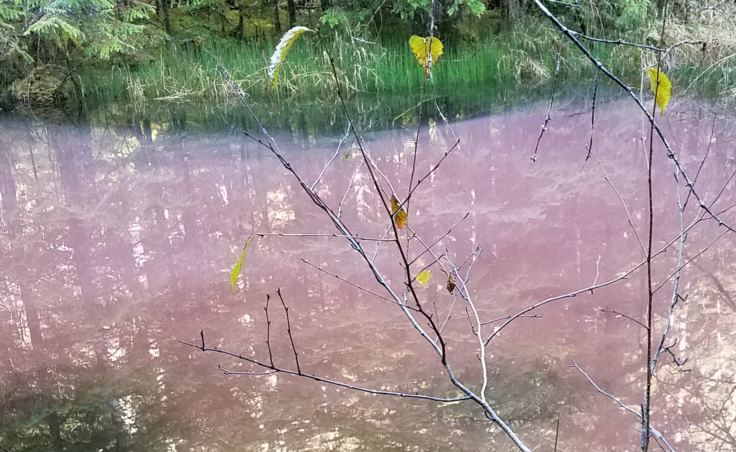 The ice cracks under my feet, and I realize that is probably one of the scariest sounds in the whole world.

I’m on thin ice, really. I’m gingerly stepping along the edge of pond ice just off the Herbert Glacier trail. Big mistake. I can’t tell what’s ice and what’s firm ground until I step on it.

It’s November, just after the first big freeze and snowfall of the year. I’m checking out reports of a pond that looks like it was just visited by French environmental artist Christo. Or, maybe somebody dumped a case of Pepto Bismol in it.

Curious Juneau stars you and your questions. Every episode we help you find an answer. Catch up on past episodes, or ask your own question on the Curious Juneau page.

What caused the weird pink color?

Listener Bill Johnson sent me some pictures of the pond taken before the snowfall. Listener Karen Hutten also sent a picture, saying the unusual “coloration was concentrated more at the back of the pond rather than right by the trail.”

“The reflection kind of screws things up a little bit because the texture that you’re seeing is from the branches above it,” Hutten said. “Really, it looked very wispy. But it could’ve been particulate matter in water.”

Local scientists suggest several possibilities for the pink or lavender color, but they say the only way to know for sure is to examine the water under a microscope.

Jackie Timothy, Southeast supervisor of the Alaska Department of Fish and Game’s Habitat Division, told me her colleagues were curious, too. But they weren’t able to get out and collect any water samples this year.

That’s why I was literally risking my life — for science!

Carrying empty plastic bottles and armed with some ice-cracking tools, I head about 3 miles up the trail to find three ponds buried underneath several inches of ice and snow.

But the water I collected was not pink. Later, I learned that I was at the wrong set of ponds.

“There are two (wooden) benches along this trail,” Hutten explains. “You go way past the first bench.”

“Ohhh!” I said, realizing that I made a huge blunder. I should’ve hiked another mile down the trail.

“You get almost to the second bench, but not quite. But really close,” Hutten explained. “It’s the pond on your left.”

The GAIA GPS app generated this map, which shows where I sampled water along the Herbert Glacier trail. The actual location of the pink pond was likely about a mile further east.

I also fumbled my role as a citizen scientist. Timothy reminded me that my sampling bottles should’ve been sterile.

Stream ecologist Rick Edwards and entomologist Elizabeth Graham use a microscope to look at my samples.

“Just looks like normal algal flock with organic matter. I don’t even see any –” Edwards said.

“There’s a green guy just slamming on by,” Graham said. “Oh, now I lost him.”

All they see is some pond debris, a couple of little bugs commonly known as water boatmen, and a very energetic form of plankton called a copepod. 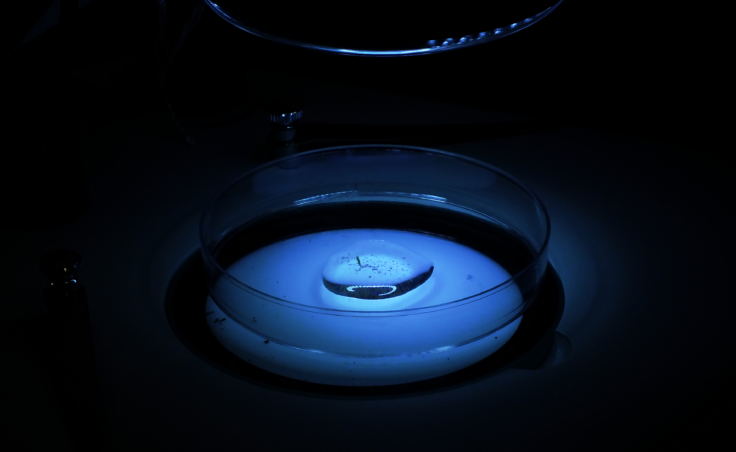 Still, I’m curious. I ask Edwards what could’ve caused the pink color shown in the pictures?

Maybe a fluorescent marker dye used by hydrologists to track water flow in the area? He said it’s unlikely, especially for floodplain ponds. And, he’d likely hear about other scientists doing such research in the area.

Habitat Division’s Jackie Timothy also remembered reports of pink water years ago, long before mining exploration even started upstream on the other side of the Herbert River.

Edwards refers to Hutten’s wispy description as a possible indication of a fungus.

“Long filamentous strands of something, and there are several microbes that grow in filaments,” Edwards said. “Obviously, fungi, the hyphal threads are filaments. That’s quite visible under a microscope, if it were a fungus.”

The coloration could also be from sulfur bacteria that feed on decomposing pond debris and give off a rotten egg smell.

Maybe it’s iron bacteria, but Edwards said that’s usually found in the sediment and shoreline, not the water column. It also generates more of a rusty, orange-red tint.

Edwards said the coloration could also be caused by blooms of algae called dinoflagellates.

While red tide-like blooms of marine dinoflagellates have been reported, Edwards said there are no reports, yet, of red or pink blooms from freshwater dinoflagellates.

I was probably just too late. In addition to making it difficult to find the ponds, Edwards said the snowfall and freezing temperatures likely altered or ended any process that generated the pink color.

“If it is a biological explanation, it’s a microbe of some sort in all likelihood,” Edwards said. “That’s all controlled by temperature.”

“It’s possible that would’ve turned all that off, and they would’ve died and been flushed out,” Edwards said. “On the other hand, there are things that grow in quite cool temperatures.”

So, the mystery of the pink pond will remain a mystery, at least for another, warmer day.

“It might pop again when the ice melts,” Edwards speculates. “In which case, we got to go out there and get a sample now.”

22m ago22m ago
Subscribe
Unsubscribe
Hàng ngày
The latest in-depth coverage covering the intersection of technology and culture. WIRED’s award-winning journalism will help you make sense of a world in constant transformation. Join us as we explore the ways technology is changing our lives.
D
Diane Rehm: On My Mind

9h ago9h ago
Subscribe
Unsubscribe
Hàng tuần
Diane Rehm’s weekly podcast features newsmakers, writers, artists and thinkers on the issues she cares about most: what’s going on in Washington, ideas that inform, and the latest on living well as we live longer.
W
World Story of the Day : NPR

23m ago23m ago
Subscribe
Unsubscribe
Hàng tuần
Our CBS News team in Washington wraps up the news of the week and goes deep into the major stories with CBS News correspondents. It's the end-of-week news magazine show you can take with you wherever you go. (046510)
F
Farm To Table Talk

35m ago35m ago
Subscribe
Unsubscribe
Hàng tuần
Is it best that our food is Local and Organic or Big and Conventional? Our view is “Both, and..” We don’t come to the table with a bias, except that good farming like good food comes in all shapes and sizes. Farm to Table Talk explores issues and the growing interest in the story of how and where the food on our tables is produced, processed and marketed. The host, Rodger Wasson is a food and agriculture veteran. Although he was the first of his family to leave the grain and livestock farm a ...
W
WIRED Science: Space, Health, Biotech, and More

24m ago24m ago
Subscribe
Unsubscribe
Hàng ngày
Narrators read our favorite written stories. You can listen to them anywhere, including on your smart speaker. Play for audio versions of WIRED's latest Science stories on genetic engineering, robotics, space, climate change, and more.
T
The Big Fight

3h ago3h ago
Subscribe
Unsubscribe
Hàng tuần
Tempers fly as the newsmakers of the week face-off in this award-winning show. Anchored by Sanket Upadhyay, this weekly program has politicians battlling wits with a live audience.
T
To the Point

6d ago6d ago
Subscribe
Unsubscribe
Hàng tháng
A monthly reality-check on the issues Americans care about most. Host Warren Olney draws on his decades of experience to explore the people and issues shaping – and disrupting - our world. How did everything change so fast? Where are we headed? The conversations are informal, edgy and always informative. If Warren's asking, you want to know the answer.
O
OPB Politics Now