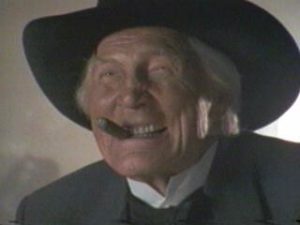 Merry Christmas, everyone! On this special holiday episode of Westerns With Dad, we’re discussing the little-seen 1997 Canadian TV production, Ebenezer! Starring noted Western stars Jack Palance and Ricky Schroeder, it’s an adaptation of Charles Dickens’ oft-adapted classic, A Christmas Carol, reset in the Old West. Utterly inessential, clearly not intended for posterity, and fairly half-assed in every aspect of production, it works best as a clear demonstration of both Jack Palance’s dynamic charisma and the utter indestructibility of the Dickens story. This ends up being a bit of a love letter to both Palance (oh, so many impersonations), and to the original story and its myriad adaptations, many of which we reflect on. The general agreement is that the Alastair Sim version is the best. We detail the strange decisions and adaptation choices made in transposing this story to the Old West, covering such topics of conversation as the the hugely underwhelming ghosts, particularly the largely unremarked-on Native American Christmas Past, imagined head canon for Fred Scrooge’s arrival in the Canadian frontier, Palance reading EE Cummings, the strange, presumably-Canadian uniforms the constabulary wears, and a brief accounting of some of our favorite other Christmas films, with a digression on the current whereabouts of Christmas Vacation’s Randy Quaid, now a mythic folk hero.

We also discuss the new Star Wars film, The Last Jedi, which we both liked quiet a bit. We’ll be back in January with the frequently requested 70s classic, Butch Cassidy and the Sundance Kid! In the meantime, you can reach us online at westernswithdad.com, where you can download older episodes of the podcast that have dropped off iTunes (such as the Balance starring Shane and City Slickers). You can email us as well, at westernswithdad@gmail.com, where you can ask us questions of suggest future episodes, and speaking of iTunes, why not rate or review the show there to increase our search engine viability! As we have no presence on Twitter or Reddit, it’s the only means we have of promoting the show! Happy Holidays!

Ebenezer was directed by Ken Jubenvill and stars Jack Palance and Ricky Schroeder, which is about it.

20m ago20m ago
Subscribe
Unsubscribe
Hàng ngày
Bald Move Pulp is where you can get your fix of robots, aliens, action space adventures, and everything in between; on television or on the big screen. Pulp was not made for serious drama, if that’s your thing, you might be looking for Bald Move Prestige.
G
Game of Thrones The Podcast

2d ago2d ago
Subscribe
Unsubscribe
Hàng tuần
Become a Paid Subscriber and get bonus podcasts: https://anchor.fm/nowplayingpodcast/subscribe Three playful movie reviewers break down a variety of film franchises by dedicating a podcast to every single sequel, reboot, and spin-off in a series. In-depth conversations cover production history, literary sources, gossip, merchandising, and personal opinion with humor and critical insight. No cinematic universe is too obscure or sacred! Over 1,200 reviews at http://nowplayingpodcast.com
T
The Plot Thickens

10d ago1w ago
Subscribe
Unsubscribe
Hàng tháng
For our third season, we're bringing you the iconic Lucy. How did a small-town girl who was told she had no talent become the funniest, most recognizable woman in America? From her early years as a model to her triumphant takeover of television, this is the story of Lucille Ball, as never heard before. Join host Ben Mankiewicz as he delves into the private world of America’s funniest redhead and hear for yourself the many triumphs and tragedies, with surprising revelations at every turn.
T
The Sci-Fi Christian

7h ago7h ago
Subscribe
Unsubscribe
Hàng tuần+
We see The Sci-Fi Christian, in all its iterations, as being about the collision between faith and nerdom. We believe that good genre fiction is about more than just entertainment. We seek to engage with the themes and philosophies behind our favorite stories, wrestling with the big ideas within speculative fiction. We’re unabashedly nerdy and unabashedly Christian. Even if your faith background differs from ours, we look forward to interacting with you at The Sci-Fi Christian!
Nghe hơn 500 chủ đề