Westerns With Dad « »
FOR A FEW DOLLARS MORE! 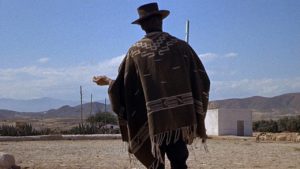 Returning to the Spaghetti Western and the films of Sergio Leone, this episode focuses on the middle entry in the Man With No Name trilogy, For a Few Dollars More. Bringing back Clint Eastwood’s iconic gunslinger and adding Lee Van Cleef’s mysterious counterpoint, it’s the most underrated of the series, and a whole hell of a lot of fun. In talking about this film, we also get into Dad’s specific disinterest in the stylistic cheapery of these films, as discussed in such previous episodes. They’re just not his thing! As it turns out, they are kind of my thing, and we discuss the reasons why this might be. Topics of conversation include such Spaghetti Western hallmarks as bad ADR and unusual sound effects, the film’s ‘procedural bounty hunter’ story, the possibility that the central characters in this film are inhuman aspects of the West, or perhaps just death-worshipping lunatics, the greatness of Van Cleef, and the decadent mania of the villain El Indio. There’s a part where I stumble about trying to articulate whether these are the definitive cinematic bounty hunters and their place in history, leading up to Dog the Bounty Hunter. Dad shuts me down.

There’s a bit of conversation at the end about the new Alien: Covenant, and its ambitions to be a deep space Frankenstein story about the end of God. I found it very interesting. In the next episode, we’ll be talking about our first Sam Peckinpah film, Ride the High Country, starring Randolph Scott and Joel McRea. You can reach us online at westernswithdad.com and email us any thoughts you’ve had or questions you’d like us to answer in the next episode at westernswithdad@gmail.com. And why not leave us reviews and ratings on iTunes, which helps improve our visibility! Thanks a lot!

For a Few Dollars More was directed by Sergio Leone and stars Clint Eastwood and Lee Van Cleef.

4m ago4m ago
Subscribe
Unsubscribe
Hàng ngày
Bald Move Pulp is where you can get your fix of robots, aliens, action space adventures, and everything in between; on television or on the big screen. Pulp was not made for serious drama, if that’s your thing, you might be looking for Bald Move Prestige.
G
Game of Thrones The Podcast

2d ago2d ago
Subscribe
Unsubscribe
Hàng tuần
Become a Paid Subscriber and get bonus podcasts: https://anchor.fm/nowplayingpodcast/subscribe Three playful movie reviewers break down a variety of film franchises by dedicating a podcast to every single sequel, reboot, and spin-off in a series. In-depth conversations cover production history, literary sources, gossip, merchandising, and personal opinion with humor and critical insight. No cinematic universe is too obscure or sacred! Over 1,200 reviews at http://nowplayingpodcast.com
T
The Plot Thickens

10d ago1w ago
Subscribe
Unsubscribe
Hàng tháng
For our third season, we're bringing you the iconic Lucy. How did a small-town girl who was told she had no talent become the funniest, most recognizable woman in America? From her early years as a model to her triumphant takeover of television, this is the story of Lucille Ball, as never heard before. Join host Ben Mankiewicz as he delves into the private world of America’s funniest redhead and hear for yourself the many triumphs and tragedies, with surprising revelations at every turn.
T
The Sci-Fi Christian

7h ago7h ago
Subscribe
Unsubscribe
Hàng tuần+
We see The Sci-Fi Christian, in all its iterations, as being about the collision between faith and nerdom. We believe that good genre fiction is about more than just entertainment. We seek to engage with the themes and philosophies behind our favorite stories, wrestling with the big ideas within speculative fiction. We’re unabashedly nerdy and unabashedly Christian. Even if your faith background differs from ours, we look forward to interacting with you at The Sci-Fi Christian!
Nghe hơn 500 chủ đề