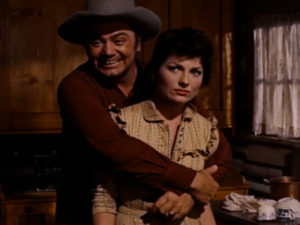 Coming from director Delmar Daves, 1956’s Jubal tells a story of sexual obsession on the open plains, highly reminiscent of Shakespeare’s Othello. Starring Glenn Ford as stoic loner Jubal Troop, it has come to more prominence lately, possibly owing to a fine Criterion restoration, and features a cast of beloved character actors sinking their teeth into some high melodrama with aplomb. An unusually adult 50s western, it’s worth a look for its maturity and as usual, its glorious location photography, as well as a divisive Rod Steiger performance as the Iago of the piece. Topics of conversation include the sexual politics of the story, the morality of Valerie French’s femme fatale, a bit of talk of star Ernest Borgnine’s other great roles (including his wolf pit scene in The Vikings), Glenn Ford’s perhaps excessive stoicism, the abruptness of the conclusion, early Charles Bronson, the status bestowed by a Criterion edition, and man, so many Rod Steiger impersonations. There’s a lot of that. Good movie, as Dad would say. Check out Jubal! And thanks to Ron for the suggestion! Please keep those coming. Also, I have a cold in this one, and though I’ve edited out as many gross sniffles as I could, I’m sure a few snuck in. For this, I apologize.

We also discuss some TV, specifically Dad’s current regimen of old Westerns and my recent delve into the new season of Stranger Things (and how it relates to the shows we used to watch in the 80s). If you’d like to suggest a movie or ask a question, please email us at westernswithdad@gmail.com! Also, you can help the podcast by leaving ratings and reviews on iTunes, which increases our visibility! Cool! If you’d like to hear back episodes of the show (beyond what’s on iTunes), they’re all there on our website, westernswithdad.com! On the next episode of the show, we’ll be talking about Jim Jarmusch’s odd, poetic 90s western Dead Man, starring Johnny Depp and a bunch of familiar faces. Should be weird!

1d ago1d ago
Subscribe
Unsubscribe
Hàng tuần
Become a Paid Subscriber and get bonus podcasts: https://anchor.fm/nowplayingpodcast/subscribe Three playful movie reviewers break down a wide variety of film franchises by dedicating a podcast to every single sequel, remake, reboot, and spin-off in a series. Conversations are in-depth and cover production history, literary sources, gossip, merchandising, and good old fashioned personal opinion with loads of humor and critical insight. No cinematic universe is too obscure or sacred!
T
The Talking Dead - A podcast dedicated to the AMC TV series The Walking Dead

2d ago2d ago
Subscribe
Unsubscribe
Hàng tuần
The Talking Dead is a fan podcast dedicated to the AMC TV series The Walking Dead. Tune in for news, rumours, reviews, and more!
I
I Sell Comics