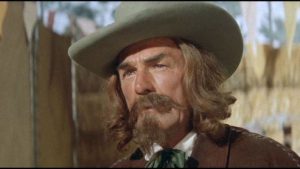 1962’s Ride the High Country is the subject of this week’s episode. An early Sam Peckinpah and a late victory lap for golden age Western stars Joel McRea and Randolph Scott, it follows a pair of aging gunslingers as they attempt to transport gold cross country. It’s a nice adventure film about the twilight of the West, and a pair of aging gunslingers wondering what their place will be in the days to come. And also an odd little jaunt of a film involving Carnival barkers, farmer’s daughters, and rowdy miners, plus a surprising amount of sexual assault. The plot twists in a few unexpected ways and we both end up liking it very much. Topics of conversation include the semiotics of the Wild West Stunt Show, various forms of masculine competition, Randolph Scott’s surprising range as an actor, Double Feature matinees back in the day, the showcase Wedding at a brothel sequence, the etymology of the word ‘horndog’, and the slight cheap out of the final shootout. Solid movie, and another strong showing on the podcast for Randolph Scott.

Other films discussed, in fairly perfunctory fashion, are a George McGovern western Dad can’t recall the name of, and Wonder Woman. This episode was a recommendation from a listener like you! If there’s a Western you’d like to hear an episode about, or have any questions you’d like to hear us answer on the show, let us now at westernswithdad@gmail.com! And visit us at our website, westernswithdad.com! And why not also got to iTunes and leave us a rating and/or review, which improves the visibility of the show! Next time, we’ll be talking about one of my favorite things ever, the first season of the HBO television series Deadwood. I’ve been waiting for this one, let me tell you.

G
Game of Thrones The Podcast

9d ago1w ago
Subscribe
Unsubscribe
Hàng tuần
The Talking Dead is a fan podcast dedicated to the AMC TV series The Walking Dead. Tune in for news, rumours, reviews, and more!
B
Bald Move Pulp

17h ago17h ago
Subscribe
Unsubscribe
Hàng tuần+
Bald Move Pulp is where you can get your fix of robots, aliens, action space adventures, and everything in between; on television or on the big screen. Pulp was not made for serious drama, if that’s your thing, you might be looking for Bald Move Prestige.
B
Binge Mode: Marvel

23h ago23h ago
Subscribe
Unsubscribe
Hàng tuần
Become a Paid Subscriber and get bonus podcasts: https://anchor.fm/nowplayingpodcast/subscribe Three playful movie reviewers break down a variety of film franchises by dedicating a podcast to every single sequel, reboot, and spin-off in a series. In-depth conversations cover production history, literary sources, gossip, merchandising, and personal opinion with humor and critical insight. No cinematic universe is too obscure or sacred! Over 1,200 reviews at http://nowplayingpodcast.com
W
What To Watch

12h ago12h ago
Subscribe
Unsubscribe
Hàng ngày
What To Watch is Entertainment Weekly's daily guide to the shows that should be on your radar -- be it network, cable, premium or streaming! Hosted by Gerrad Hall.
D
DumTeeDum - A show about BBC Radio's 'The Archers'