Westerns With Dad « »
THE SALVATION! 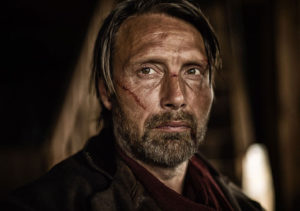 In attempting to examine the breadth of the Western genre, we want to focus on films from all eras, and that includes the modern movie landscape. So this week, we’re taking a look at The Salvation, a genre exercise from only a few years ago! Starring acclaimed actor Mads Mikkelsen, this is a modern version of the familiar revenge thriller, set in the old west. It features a pretty terrific cast and a solid set-up, but both Dad and I feel it doesn’t quite do enough to distinguish itself, especially in failing to fully embrace the things that make it unique. In particular, the character’s status as Danish immigrants, a tantalizing plot and thematic idea that ends up not going much of anywhere. Topics of conversation include the Dogme 95 movement and provocateur filmmaker Lars Von Trier, the constant use of dark, oily filters, the sometimes in-your-face nihilism of the chosen subject matter, how terrific Mads is as the new Hannibal Lector, how terrific costar Eva Green is on her own TV show, Penny Dreadful, the surprisingly nasty and evil townspeople presented in the film, the enigma of the titular Salvation, and my speculation that the film is actually about what drives people who have been constantly victimized to survive, although that may actually be reaching a bit. This has a bit more digressions than usual, but then, it’s not a film with an excess to discuss, I’m afraid.

At the end, we discuss Guardians of the Galaxy Vol. 2, and its very charismatic use of Tombstone actors in prominent roles. There’s also a bit of talk of the new Dark Tower trailer, and the ways it may overlap into the Western genre. Please visit us online at westernswithdad.com, where you can hear back episodes of the show, and also hey, how about leaving us ratings and reviews on iTunes? That’d work out great for us! Next week, we’ll be talking about the middle segment in Sergio Leone’s Man With No Name trilogy, For a Few Dollars More!

8m ago8m ago
Subscribe
Unsubscribe
Hàng tuần+
Bald Move Pulp is where you can get your fix of robots, aliens, action space adventures, and everything in between; on television or on the big screen. Pulp was not made for serious drama, if that’s your thing, you might be looking for Bald Move Prestige.
G
Game of Thrones The Podcast

1d ago1d ago
Subscribe
Unsubscribe
Hàng tuần
Jim and A.Ron review each week's episode of HBO's Game of Thrones and your feedback.
B
Binge Mode: Marvel

24h ago24h ago
Subscribe
Unsubscribe
Hàng tuần
Become a Paid Subscriber and get bonus podcasts: https://anchor.fm/nowplayingpodcast/subscribe Three playful movie reviewers break down a wide variety of film franchises by dedicating a podcast to every single sequel, remake, reboot, and spin-off in a series. Conversations are in-depth and cover production history, literary sources, gossip, merchandising, and good old fashioned personal opinion with loads of humor and critical insight. No cinematic universe is too obscure or sacred!
W
What To Watch

25m ago25m ago
Subscribe
Unsubscribe
Hàng tuần+
What To Watch is Entertainment Weekly's daily guide to the shows that should be on your radar -- be it network, cable, premium or streaming! Hosted by Gerrad Hall.
Nghe hơn 500 chủ đề