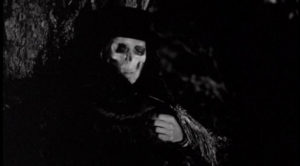 Jim Jarmusch’s utterly bizarre 1995 ‘Acid Western’ Dead Man is the subject of this episode, featuring Johnny Depp at his height as a tenderfoot traveling into the Frontier and also, potentially, the reincarnation of the poet William Blake. Shot in B&W and featuring a unique Neil Young soundtrack, Dead Man defies easy description and is a strong contender for strangest film we’ve covered on the show. And while I reveled in the unusual, avant-garde style and philosophical explorations, Dad found the whole thing remarkably interminable, a word that will come up more than a few times when describing the experience of watching it! Real split decision on this one. Topics of conversation include solipsism, the most likely interpretation of the film (involving a soul’s journey from life to death), the gorgeous desolation captured on film, the huge list of entertaining and confusing cameos the film boasts (Robert Mitchum! Crispin Glover! Iggy Pop!), the moments of shocking violence or striking dream imagery, Neil Young’s aggressively atonal and divisive score, the value of confrontational art, and the validity of Acid Western as a categorization. There’s also some good car horns in the background for you! Can’t be helped sometimes, my street’s a disaster lately.

Letting you in on the behind the scenes drama a bit here, we had some internet issues while recording this, and one thing that got lost by the way side was Other Things We’ve Seen Lately! For the record, I saw the new Thor movie (funny!) and the new Justice League movie (boring!), and I assume Dad watched the Seahawks season kind of start slipping away. Come visit us online at westernswithdad.com and email any episode recommendations or questions to westernswithdad@gmail.com, and why not come by iTunes and leave us a rating or review? It improves our visibility! On the next episode, we’ll be talking about both versions of the Western classic, True Grit!

8m ago8m ago
Subscribe
Unsubscribe
Hàng tuần+
Bald Move Pulp is where you can get your fix of robots, aliens, action space adventures, and everything in between; on television or on the big screen. Pulp was not made for serious drama, if that’s your thing, you might be looking for Bald Move Prestige.
G
Game of Thrones The Podcast

1d ago1d ago
Subscribe
Unsubscribe
Hàng tuần
Jim and A.Ron review each week's episode of HBO's Game of Thrones and your feedback.
B
Binge Mode: Marvel

1h ago1h ago
Subscribe
Unsubscribe
Hàng tuần
For 25 years CINEMATIC SOUND RADIO has been playing for you the very best music from film, TV and video games. We feature music from the Golden age classic scores of the 30, 40 and 50s, the retro silver age scores from the 60s and 70s, and all the way through to the 80s, 90s and the modern day classics of the 21st century. When tuning in you'll hear interviews with your favourite composers, orchestrators, musicians, and industry insiders. We also do deeper dives into some of the best scores ...
T
The Twilight Zone Podcast

24h ago24h ago
Subscribe
Unsubscribe
Hàng tuần
Become a Paid Subscriber and get bonus podcasts: https://anchor.fm/nowplayingpodcast/subscribe Three playful movie reviewers break down a wide variety of film franchises by dedicating a podcast to every single sequel, remake, reboot, and spin-off in a series. Conversations are in-depth and cover production history, literary sources, gossip, merchandising, and good old fashioned personal opinion with loads of humor and critical insight. No cinematic universe is too obscure or sacred!
W
What To Watch

20m ago20m ago
Subscribe
Unsubscribe
Hàng tuần+
What To Watch is Entertainment Weekly's daily guide to the shows that should be on your radar -- be it network, cable, premium or streaming! Hosted by Gerrad Hall.
Nghe hơn 500 chủ đề