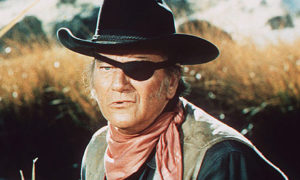 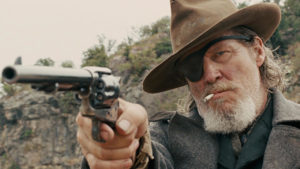 On this belated episode, we are talking about both versions of the Charlie Portis novel True Grit! The original, from 1969, is famously the film that won John Wayne his Oscar, and the 2010 remake from the Coen Brothers! Both are great, as it turns out, and surprisingly similar in a number of ways (largely owing to the use of Portis’ dialogue, we assume, having not read the original book). Both are largely esteemed classics of the genre, well worth your time, although they’re so beloved you’ve probably seen one or both already. Topics of conversation include a merciless comparison of each film’s lead performance (in which Dad discovers a new appreciation of Kim Darby), a few digressions on the Coens filmography, the popularity of Jeff Bridges’ performance as Rooster Cogburn and his attempts to reuse it in the following years, and a fair number of impersonations, of Bridges, Wayne, Robert Duvall, and Josh Brolin’s mush-mouthed villain Tom Chaney. Thanks for waiting for us on our late holiday schedule!

We talk a little about current Western projects to keep an eye on, and other recent viewings (Dad’s umpteenth viewing of A Christmas Story, and my appreciation of Guillermo del Toro’s latest, a interspecies romance set during the Red Scare, The Shape of Water. In the next episode of Westerns With Dad, we’ll be talking about a barely known Canadian TV movie entitled Ebenezer, a Western-set Christmas Carol retelling starring Jack Palance! Who knows how that’ll go!

2d ago2d ago
Subscribe
Unsubscribe
Hàng tuần
In a unique weekly podcast, Edith Bowman sits down with a variety of film directors, actors, producers and composers to talk about the music that inspired them and how they use music in their films, from their current release to key moments in their career. The music chosen by our guests is woven into the interview and used alongside clips from their films. https://twitter.com/soundtrackinguk https://www.facebook.com/Soundtrackingwithedithbowman/ https://play.spotify.com/user/soundtrackingwi ...
J
James Bonding

4d ago4d ago
Subscribe
Unsubscribe
Hàng tuần
Matt Gourley and Matt Mira love James Bond so much they decided to make a podcast about it. Each episode they invite a guest to dive deep into one movie from the greatest film franchise known to man. The entire James Bonding catalogue is now being re-released for free, one week at a time, starting 10/5/22. We never left. Hosted on Acast. See acast.com/privacy for more information.
T
The Talking Dead - A podcast dedicated to the AMC TV series The Walking Dead

13d ago1w ago
Subscribe
Unsubscribe
Hàng tuần
The Talking Dead is a fan podcast dedicated to the AMC TV series The Walking Dead. Tune in for news, rumours, reviews, and more!
D
DumTeeDum - A show about BBC Radio's 'The Archers'

5d ago5d ago
Subscribe
Unsubscribe
Hàng tuần
Otaku Spirit Animecast is a series of podcast episodes that focus on the Anime culture. Reviews, News, and tons of discussion. Stuff for all anime fans, from anime fans.
C
Classic Film Jerks

11d ago1w ago
Subscribe
Unsubscribe
Hàng tháng
Join movie fans Michael DiGiovanni and Andrew Bloom as they set out to determine if all these so called classic films are indeed just that.
N
Now Playing - The Movie Review Podcast

5d ago5d ago
Subscribe
Unsubscribe
Hàng tuần
Become a Paid Subscriber and get bonus podcasts: https://anchor.fm/nowplayingpodcast/subscribe Three playful movie reviewers break down a variety of film franchises by dedicating a podcast to every single sequel, reboot, and spin-off in a series. In-depth conversations cover production history, literary sources, gossip, merchandising, and personal opinion with humor and critical insight. No cinematic universe is too obscure or sacred! Over 1,200 reviews at http://nowplayingpodcast.com
Nghe hơn 500 chủ đề